If you are concerned about the appearance of your teeth and self-conscious about your smile, our team are able to offer a full range of aesthetic (cosmetic) treatments from the simple whitening of teeth to the use of porcelain veneers, crowns, bridges and tooth coloured fillings.

Please speak to your dentist, who will be happy to discuss suitable treatments and explain the benefits of cosmetic dentistry. 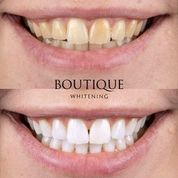 If you have any teeth that are worn down, chipped or stained or small gaps, you could consider dental veneers. These are wafer-thin, custom-made shells of tooth-coloured material that are bonded to the front of your natural teeth to improve the appearance by changing their colour, shape, size or length.

Dental veneers can be made from porcelain or from resin composite materials. Porcelain veneers tend to resist staining more than resin ones and they also mimic the light reflecting properties of your natural teeth more closely. Resin veneers are thinner so do require less of the tooth surface to be removed before placement.

You will normally require 2-3 visits to your dentist, the first to discuss what you would like and whether veneers are the best treatment option for you. Impressions will be taken for the lab to produce your veneers, your tooth will be prepared and then you will come and see us for the all-important fitting to change your smile.

Patients often ask if they can correct crooked teeth by having veneers and for teeth that are not severely crooked, this can often be an option. In more severe cases and in order to preserve the natural structure of your teeth, orthodontics or Invisalign braces would probably be a better solution.

When you just want to change the colour and not the shape of the tooth you could consider a course of tooth whitening and if there are small defects or chips, dental bonding could resolve the problem.

Click here to visit our dedicated page on Crowns and Bridges

Tooth whitening is a chemical process using carbamide peroxide. The peroxide in the whitening agent breaks down into tiny molecules that move inside the tooth structure to break down the discolouration. The benefit of whitening is that teeth can be whitened quickly in a simple manner. The amount of whitening varies with each individual. Most patients achieve a change within 2-5 weeks. We use Boutique whitening here at Berners Dental.        Award winning whitening- Boutique Whitening has won no less than 7 major industry awards over the past 2 years.

What is the difference between hydrogen peroxide and carbamide peroxide?

A man named Louis Jacques Thenard discovered it in 1818. Hydrogen peroxide is a potent oxidizing agent. The whitening action is a result of oxygen free radicals that oxidize larger pigment molecules into smaller, less visible molecules.

Hydrogen peroxide breaks down almost immediately, releasing its peroxides entirely within the first hour. It is thought that due to this relatively concentrated bombardment of peroxides on the pulp, hydrogen peroxide produces more sensitivity than carbamide peroxide of a comparable concentration.

How many appointments do you need for teeth whitening?

A typical procedure would require one visit for a comprehensive dental examination. Legally, this must be done prior to teeth whitening. Photographs and impressions can be taken during this visit.

You would then return in two weeks to have your new whitening trays fitted to begin your teeth whitening.

You would whiten for between 3 and 4 weeks.

You would then return for final assessment and photographs to see how effective your teeth whitening treatment has been.

Do you want beautiful straight teeth? Welcome to QuickStraight Teeth.

The QuickStraightTeeth™ orthodontic system uses nearly-invisible braces to gently straighten your teeth, and give you that smile you’ve always dreamed of.

We all want a perfect smile, but all too often, the word ‘braces’ can conjure up images of old-fashioned ‘train-tracks’ or Ugly Betty!

You will be pleasantly surprised by QuickStraightTeeth™. Our braces look beautiful and discreet with top quality tooth-coloured brackets and wires, making them virtually invisible. Most people won’t know you are wearing braces at all and treatments can take as little as 6 months to complete.

With an option to suit almost everyone, QuickStraightTeeth™ can boost your confidence, raise your self-esteem, and give you that winning smile.

What are the benefits?

Cost
Due to low laboratory fees and quick treatment times, QST invisible braces are one of the most cost-effective systems available.

Time
Getting straight teeth, and a beautiful smile is fast! Treatments take anywhere between 4 and 24 weeks depending on complexity.

Appearance
Our braces are tooth-coloured and are nearly invisible in the mouth, so you can get straight teeth without the ‘Ugly Betty’ look.

Comfort
Our braces have been designed to ensure maximum comfort. Not only will they look beautifully discreet, they will feel great too!

Professional and affordable dental care for the whole family

Although most of our surgeries are situated on the 1st floor and require the use of stairs, we have wheelchair access and 2 ground floor surgeries (limited use).

Reception is open from 8.30am every day